Now You Can Buy Wind Power Directly From A Farmer

Maybe you’ve thought romantically of living “off the grid,” using candles for light and fire to cook, and snuggling under home-woven blankets for warmth in the winter. But in reality, off-grid life can be a lot more challenging than our fantasies might lead us to believe.
What if you could get clean, green energy through the grid, and buy it directly from farmers?
A short drive north of Amsterdam, Bernard Kadijk runs a small farm, where he grows humble crops like wheat, potatoes and carrots, and has one sweet little money-making machine called a windmill.

It wasn’t always so lucrative; for the last few decades, Kadijk was selling his wind energy to Holland’s large energy companies at 3 Euros per megawatt. But now that he sells it directly to customers, he’s making 8 Euros per megawatt. That’s a big economic boost (much more than potatoes) and it’s thanks to a start-up company called Vandebron, which has created a platform for peer-to-peer energy transactions. 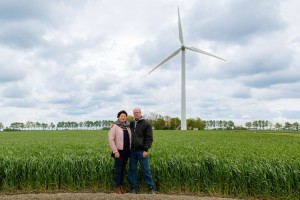 Through Vandebron, you can sign up for a month, 1-year, or 3-year subscription to green energy (wind, solar, or biofuel, a.k.a. cow dung) that comes through the grid, to you, straight from a farmer, whose name you know and who is pictured on the website.

The website allows you to pick from different producers, who are named and displayed in a photo alongside a small story about their farm. This way, energy is no longer provided anonymously.

Farmers who work with Vandebron allot 80 percent of their energy output, in whatever form, to the customers on the platform; that way, it’s ensured that there will always be enough supply to satisfy demand. And Vandebron takes a flat fee from each subscription, rather than a percentage, so their profit is not tied to energy consumption.
Vandebron was founded by four Dutch guys in their twenties and thirties — Remco Wilcke, Matthijs Guichelaar, Aart van Veller and Michael Fraats; in just about a year, the company has grown to 30 full-time employees and now brings energy to over 20,000 customers through 13 farmers.
And they are proud of what they’ve accomplished so far: “We are the fastest growing energy company in the Netherlands,” said Pieter van Wijk, the company’s Community Manager, in a Skype conversation while he was visiting Kadijk at home.
For Kadijk, the significant income boost is a huge plus. But he also loves “doing business with young people,” rather than selling his energy to a large company. As he said this, he was sitting around his kitchen table with his daughter Julia — who is also interested in green energy — and the employees from Vandebron.
Over the next year, Vandebron hopes to expand their reach to 50,000 households in Holland, and in 2016 they hope to bring their platform to Germany and the U.K. And they sound very confident. Who knows, maybe soon we’ll have wind farm shares and green energy CSAs.