De bron: http://nocamels.com/2015/06/trash-biogas-homebiogas-system/
The Western world may have grown accustomed to microwave ovens and electric burners, but the majority of developing populations still cook their food and heat their homes over an open fire. While that may seem like a more “pastoral” and healthy way to live, the World Health Organization reports that up to four million people die from the direct and indirect effects of cooking with solid fuels, like wood, charcoal and coal.

This staggering statistic hadn’t come to the attention of the Israeli inventors of the HomeBioGas system, until the information was pointed out to them by none other than United Nations Secretary General Ban Ki-moon. During a visit with Israeli President Reuben Rivlin last year, Ban expressed the global need for a sustainable and safe solution to this dire issue, naming Israel’s HomeBioGas’s bio-digester as a very viable answer.

From trash to treasured cooking oil

HomeBioGas’s TevaGas (TG) device is the first family-sized bio-digester made available on the market, which, according to Marketing Director Ami Amir, “is as easy to use as a dish-washer.” For those who don’t know what a bio-digester is, it takes organic material (like left-over food) and converts it into a fuel, known as biogas, through an anaerobic process carried out in a warm atmosphere. This fuel can then be used by a household for other purposes, like heating. According to Amir, this system does not even generate any foul odors.

“The basic underlying principles of bio-digester are, well biological,” Amir explains, “There are bacteria or microbes that thrive in conditions where there is no air (anaerobic) that are able to break down organic matter into their components. One of the results of this process is known as biogas, a combination of methane gas and carbon dioxide.”

By feeding the remains of their dinner , or any organic trash for that matter, into the bio-digester, users are able to generate clean, renewable biogas to cook three meals a day. In addition, the remaining soluble chemicals left over from the biogas breakdown process (about 10 liters according to the company) can be used as liquid fertilizers for gardens and vegetable crops, a very useful addition for agriculturalists and sustainable farmers. 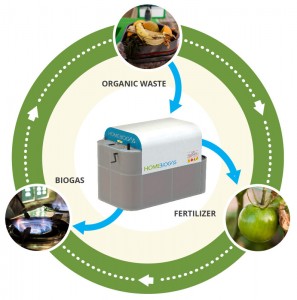 Drastically improving the standard in bio-digesters

While it sounds similar to composting, something many of us do already, Amir stresses that HomeBioGas’s system is nothing of the sort. “Composting is feel-good, but it doesn’t provide a lot of real value,” mainly because many people who compost don’t actually treat the organic matter themselves. He adds: “Composting generates methane that is not treated and is therefore much more harmful to the atmosphere.”

The bio-digester itself is no novel innovation; The Israeli inventors of the HomeBioGas system, CEO Oshik Efrati and COO Yair Teller, became familiar with cheaper home bio-digesters, but sought out a way to make them more efficient, and accessible. “People have been developing and building devices similar to ours for about 20-30 years,” Amir states of the history of bio-digester technology. However, the majority of these devices in developing countries like China and India are “very primitive and basic devices that are a pain to install and difficult to operate.”

The HomeBioGas team spent years improving on existing Indian and Chinese bio-digester models, but soon realized that underprivileged populations were in need of an entirely new model. “The intention was to develop the best product that will provide biogas from waste for the under-served populations of Latin America, Africa and Asia,” says Amir. Of course, before releasing their product to the world-at-large, the team wanted to test it out at home, which is why the first functional models of the system were introduced to a Bedouin community in Israel’s Negev Desert. Amir explains: “In these communities, there is little or no means of waste disposal and hardly any connection to utilities.”

For environmentally-minded First Worlders too

Since their launch, HomeBioGas has launched other aid projects in the Palestinian territories, supported by USAID and the Peres Center for Peace, as well as in the Dominican Republic, where rural populations contribute heavily to the problem of deforestation, because of the need for cooking wood. “People from the Dominican Republic told us that each family destroys about ten trees a year and that usually the woman in the family is made to carry up to 6 tons of wood a year,” Amir says.

Since the company serves mainly under-resourced communities, many of its clients don’t have the funds to support the shipment of the product. This means the company needs to rely on hefty subsidies from governments and non-governmental organizations, which can be hard to come by.

Yet due to a surge in awareness of environmental issues, like recycling, composting and homebiogas-ing, the company is even earning some support in developed countries like the United States, Australia and some European countries, who want the system for their own homes. According to Amir, “The need of middle class populations may not be as dire, but some still want a ‘smart can’ that can take their waste and turn it into something useful like cooking gas and fertilizer.”

Currently, the system is sold separately at a price of about $2,500 (NIS 10,000). And while HomeBioGas doesn’t have any direct competitors per say, the cheaper, simpler alternatives available in China and India represent a challenge only due to their drastically lower price.

Gepubliceerd op 12 jun. 2015
In the Middle East, many rural communities suffer from a lack of municipal services such as waste management and energy provision. Without access to such services, off-grid communities struggle to find a sustainable energy source and to properly dispose of their animal waste. The Arava Institute for Environmental Studies is using biogas technology to help address these needs in underserved communities in Israel’s Bedouin Community,
Palestine, and Jordan.