GMG becomes largest fund yet known to pull out of coal, oil and gas companies in a move chair Neil Berkett calls a ‘hard-nosed business decision’ justified on ethical and financial grounds.

The Guardian Media Group (GMG) is to sell all the fossil fuel assets in its investment fund of over £800m, making it the largest yet known to pull out of coal, oil and gas companies.

The decision was justified on both financial and ethical grounds, said Neil Berkett, GMG chair: “It is a hard-nosed business decision, but it is influenced by the values of our organisation. It is a holistic decision taking into account all of those things.”

Berkett said fossil fuel assets had performed relatively poorly in recent years and were threatened by future climate change action, while an ethical fund already held by GMG had been a “stellar” performer and renewable energy was growing strongly. “This means we can adopt socially responsible investment criteria without putting at risk the core purpose of GMG’s investment funds: to generate long-term returns that guarantee the financial future and editorial independence of the Guardian in perpetuity,” he said. 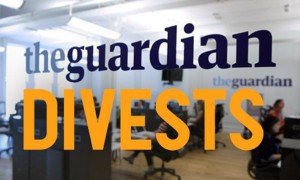 Why the Guardian Media Group is getting out of fossil fuels
Neil Berkett
Read more
A series of analyses have shown that current reserves of coal, oil and gas are several times greater than can be burned whilst limiting climate change to the internationally agreed limit of 2C. The fast-growing, UN-backed divestment campaign argues that the business models of fossil fuel companies, which continue to spend billions on searching for new reserves, are endangering the climate. The campaign also argues many fossil fuel assets could become worthless if the world’s governments act to curb global warming, a risk taken seriously by the World Bank and the Bank of England.

The Guardian’s Keep it in the Ground campaign is asking the world’s two biggest charitable funds – the Bill and Melinda Gates Foundation and the Wellcome Trust – to divest their endowments from all fossil fuels. Over 180 groups around the world have already taken this step, including Syracuse University, which on Tuesday committed to divesting its $1.18bn (£799m) endowment. Previously, the largest fund to divest from all fossil fuels was the Rockefeller Brothers Fund ($860m (£582m)), a fortune that originated from the company that became ExxonMobil. Others, including the world’s largest sovereign wealth fund, held by Norway, have divested from coal companies.

Berkett said the percentage of fossil fuel assets currently in the GMG investment fund was in the low, single digits. He said GMG, which owns the Guardian and Observer newspapers and website, has set a target of a “couple of years” to sell its direct fossil fuel investments, such as company shares and bonds, and five years to divest “co-mingled” funds which contained some fossil fuel assets. He said GMG would also be increasing its socially responsible investments.

Berkett led a two-month review with GMG’s investment advisers Cambridge Associates and said the critical step was deciding if GMG would be able to influence fund managers to provide the fossil-fuel-free investment options needed for GMG to divest. He said just a few dozen of the 17,400 institutional, high-quality managers were currently fossil free in their asset allocation.

10 myths about fossil fuel divestment put to the sword
Read more
“This [need to influence] is a major step in a strategy of managed divestment. It must be executed carefully to preserve our investment returns. But it remains the right thing to do,” Berkett said. “It is a policy we are proud to have initiated at a time when climate change has become an issue not just for investors, news organisations or UN negotiators – but for all of us.”

The Guardian’s editor-in-chief Alan Rusbridger said: “I’m really delighted that GMG, having independently considered all the evidence, has decided to divest out of fossil fuels. What was a trickle is becoming a river and will, I suspect, become a flood. I’m glad that GMG is ahead of the trend – and believe this decision will be strongly influential on other companies and foundations.”

Bill McKibben, a US environmentalist who has led the divestment campaign said: “The Guardian understands there’s an argument and a fight about climate change. The argument – as its reporters have chronicled – we have long since won; everyone knows by now the planet is in peril. But the fight with the fossil fuel industry has become a pitched battle, and now the Guardian lends its weight here as well. When the roll of honour for action on climate change is someday called, the Guardian’s name will be high on the list.”

Ellen Dorsey, executive director of the Wallace Global Fund and another key figure in the divestment movement, said: “I think at pivotal moments in history we have seen editors and media outlets stand up and take unprecedented action. One could think of the abolition of slavery and the civil rights movement in the US and I liken the Guardian’s campaign to that kind of courageous action. I hope it will bring other institutions along to follow suit and join you.”