A new law recently passed in France mandates that all new buildings that are built in commercial zones in France must be partially covered in either plants or solar panels.

Green roofs, as they are called, have an isolating effect which helps to reduce the amount of energy needed to heat a building during the winter or cool it in the summer. They are capable of retaining rainwater and reducing problems with runoff, and also offer birds a place to call home in the urban jungle.

French environmental activists originally wanted to pass a law that would make the green roofs cover the entire surface of all new roofs.

However, partially covered roofs make for a great start, and are still a huge step in the right direction.

Some say the law that was passed is actually better, as it gives the business owners a chance to install solar panels to help provide the buildings with renewable energy, thereby leaving even less of a footprint.

Green roofs are already very popular in Germany and Australia, as well as Canada’s city of Toronto! This  by-law was adopted in 2009, by the city of Toronto which mandated green roofs on all new industrial and residential buildings. 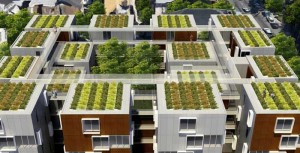 There are so many benefits to green roofs. Here are just a few:

Adding natural beauty and major aesthetic improvement to buildings, which in turn increases the investment opportunity.
Helping contribute to landfill diversion by prolonging the life of waterproofing membranes, using recycled materials, and prolonging the service of heating, ventilation, and HVAC systems through decreased use.
Green roofs assist with storm water management because water is stored by the substrate, then taken up by plants, and thus returned to the atmosphere through transpiration and evaporation. They also retain rainwater and moderate the temperature of the water and act as natural filters for the water that does run off. They delay the time at which runoff occurs, which results in decreased stress on sewer systems during peak periods.
The plants on green roofs do a great job of capturing airborne pollutants and other atmospheric deposition. They can also filter noxious gasses.
They open up new areas for community gardens, commercial and recreational space in busy cities where this space is generally quite limited.
France is definitely on the right track, but it should be a mandate that all new buildings being built in North America, and even worldwide, adopt this amazing idea to reap all of the potential benefits.