Cal State L.A. hydrogen station becomes first in California to be certified to sell fuel to the public 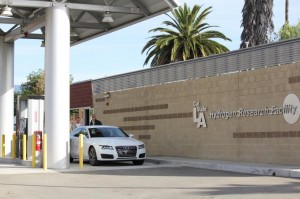 Los Angeles—The Cal State L.A. Hydrogen Research and Fueling Facility has become the first station in California to be certified to sell fuel to the public.

The facility recently passed a rigorous state performance evaluation and can now sell hydrogen by the kilogram to drivers of fuel cell vehicles.

“This is a milestone in the commercialization of hydrogen in preparation for the next generation of electric vehicles that will be powered by hydrogen,” said Michael Dray, technical operations manager at the fueling facility. “It’s equivalent to getting the first sticker from the state government to sell gasoline by the gallon.”

Governor Jerry Brown’s office informed the university this month that the fueling facility had received the certification, known as California Type Approval. The state is leading the effort to develop such facilities and has allocated $200 million during the next decade to further the construction of a hydrogen-fueling network across California.

The Governor’s Office of Business and Economic Development (GO-Biz) said the hydrogen station’s certification “demonstrates that close coordination between government and industry can enable a seamless and fair consumer experience for this critical technology.”

Opened last May, the fueling station at Cal State L.A. is the largest such facility on a university campus in the United States and produces hydrogen on site. The station is capable of using renewable sources such as solar and wind power for hydrogen production.

The hydrogen facility provides key research data on fueling performance and station operations to the U.S. Department of Energy and National Laboratories, as well as to state agencies such as the California Energy Commission and California Air Resources Board.

“Our hydrogen station is playing a crucial role in helping situate California as a national leader in zero emission vehicles,” University President William A. Covino said. “The station also provides an ideal opportunity for Cal State L.A. students, faculty and staff to collaborate on cutting-edge research and technology initiatives with government agencies that will contribute to improving air quality in Los Angeles and beyond.”

The hydrogen station has sparked international interest. In the last six months, visitors from Korea, Japan, China, Russia, Germany and Scotland have come to Cal State L.A. to tour the facility.

Audi, Honda, Hyundai, General Motors, Mercedes Benz and Volkswagen have all fueled prototype hydrogen vehicles at the Cal State L.A. station. These vehicles, which emit only water vapor, hold approximately six kilograms of hydrogen and take about six minutes to fill. A kilogram typically allows a vehicle to travel about 50 miles.

This year marked a new chapter in the use of hydrogen vehicles when Hyundai produced several hundred vehicles, many of which are being leased to drivers in the Los Angeles area, Dray said. Ideally located near two freeways and downtown Los Angeles, the Cal State L.A. fueling facility will play an increasingly important role as the use of hydrogen vehicles becomes more widespread.

Cal State L.A. is a university dedicated to engagement, service, and the public good. Founded in 1947, the University serves over 24,000 active students, and 235,000 distinguished alumni, who are as diverse as the city we serve. Located in the heart of Los Angeles, Cal State L.A. has long been recognized as an engine of economic and social mobility. Led by an award-winning faculty, the University offers nationally recognized programs in science, the arts, business, criminal justice, engineering, nursing, education and the humanities.