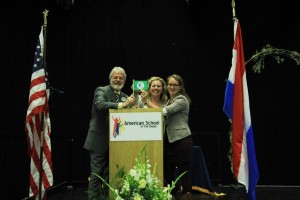 Becoming an EcoSchool allows a school to realize values and practices of sustainable action within the daily function of the school’s operations. This is the highest award level that can be reached, an international standard for sustainable schools. Worldwide there are 14,000 Green Flag labels already achieved and 40,000 participant schools in 58 countries around the world currently working towards their Green Flag status. This is only awarded to schools which comply with their 7-step program and is an internationally acknowledged symbol for environmental excellence. The participants in The Netherlands work with a 3-tier system as they attain different benchmarks beginning with the Bronze Award (which we received two years ago), then Silver Award (received a year ago) and finally now the Green Flag. The Green Flag is an internationally acknowledged symbol for environmental excellence, of which ASH officially became an EcoSchool participant of in 2011. This event celebrates the culmination of 3 years of hard work for a “Greener ASH” with the help of the entire American School of The Hague community.

On Wednesday, May 27th, the entire school gathered in the Sporthall where a full hour program were dedicated to this great milestone achieved at American School of The Hague. All staff, students and parents were firstly greeted by the Middle School “trash” drummers as they entered the Sporthall. After the official introductions, High School student Alixa recited her poem called “Is it too much to ask…” about keeping our school grounds clean, with which she won the High School poetry contest on her translation of the Eco-code and the eight Sustainability Pillars.

Next our Middle School Sustainability “Super Heroes” led the way, which was presented on stage by Middle Schooler Sebastian. The “Super Heroes” were the Middle School student’s way of translating the Eco-code into Middle School language. In February 2014 a group of students started out to create a super hero for each of the eight pillars. The idea  came directly from the Middle School students themselves. They firstly produced a comic strip and then they made the characters and the skit. The students met 1-2 times a week in their lunch break or after school to discuss the super heroes skills, character, special effects and design. Then they made a mini- sculpture to represent their super heroes and finally their costumes were ready and the skit was written in time for school wide presentations and lastly on the official Green Flag Award assembly to the entire school. Our Sustainability “Super Heroes” include:
Grade 5:
Gabriel – Bio-D (Biodiversity Pillar)
Grade 6:
Sara M. – Gilled-Gamesh (Water Pillar)
Grade 7:
Caleb T. – 3 Arrows (Recycling Pillar)
Ben M. – Dr. Polluto
Grade 8:
Sebastian M. – Narrator (older version of Dr. Polluto)
Ivan F. – The Trojan (School Grounds Pillar)
Cade V. – Zap (Transportation Pillar)
Brooklyn B. – Zoom (Energy Pillar)
Silke W. – Zen’a’ (Healthy Living Pillar)
Diana S. – Trash Glitter (Waste and Litter Pillar)

In the Elementary School, their translation of the Eco-code will be shown through Murals that have been planned to be painted in the school – one in the ECC and one on the outside wall at the Elementary School. It is still to be decided when and exactly what and how they will paint the Murals, but this will occur in the new school year. 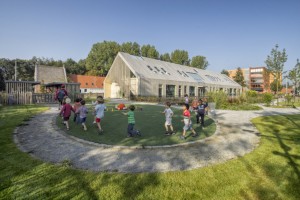 Finally, the program concluded with a special video presentation that our Grade 6 Middle Students prepared with their Sustainability Song “Tappy”, which included a presentation on the various events and activities that took place over the past year in preparation to get American School of The Hague ready for the official Green Flag status. A copy of that presentation can be seen at http://prezi.com/tz9zo7p-qqrv/ash-green-flag-award/.

After the presentation, students were reminded that this should not be the end of our Sustainability progress here at American School of The Hague. We always need new ideas. In the next school quarter it will be great to have many more student led eco-activities to be initiated for the 2014 – 2015 school year and onwards. Students were encouraged to come up with projects or activities that will help ASH stay on the right track towards a more sustainable school. We can keep the “Flag” that we have just received only if we maintain these good habits and keep sustainability at the forefront of our daily lives.

The program was then brought to a close with Anne de Klerk, the official representative from EcoSchools Nederland handing over our Green Flag to ASH. This was a great moment to watch for all present at the school wide assembly. The flag was then paraded to the flag pole and   hoisted by the Super Heroes, staff, Student Ambassadors and Dr. Spradling, Director of American School of The Hague.

Finally, American School of The Hague would like to officially thank Jaqui Lester, High School Science Teacher, and the entire EcoSchools Sustainability Committee Group, which were supported by several students, teachers, support staff and parents, who did a great job of driving American School of The Hague’s efforts to educate our community on sustainable school operation. Well done everyone on this great achievement for 2014.

If you are not yet familiar with the American School of The Hague’s official Eco-code, which was vital in the final Sustainability audit in order to receive our official Green Flag, the full American School of The Hague Eco-code has been listed below:
Energy – The ASH community believes all design and development elements of current and future ASH facilities will contain sustainable elements that aim to reduce the energy consumption and carbon footprint. Our community will encourage and inspire daily habits to instill a sustainable culture in daily life and beyond.
Litter – The ASH community stands behind a clean environment as this promotes environmental health of our local eco-systems.
Recycling – ASH curriculum and programs aim to increase awareness about recycling opportunities in our school and our local community. Recycling is our individual and collective responsibility. Information to assist implementation of good recycling habits will be provided to the ASH and wider community.
Water – ASH believes humans should be mindful in our use of resources; as they are precious. Water is one such resource. Our community should understand and respect our fortunate position in Holland with an abundance of clean, fresh water. With that, comes a responsibility to educate ourselves and to share our knowledge with the global community.
Transport – The ASH community supports local initiatives to encourage the use of bicycles, foot and public transport. We encourage everyone within a 10-minute radius of ASH to travel by foot or bicycle. We will educate the community as to the health, cost and convenience benefits associated with traveling by foot, bicycle and public transport.
Health – The ASH community encourages healthy living. We strive to educate our community and stimulate healthy choices and balanced lifestyles.
Bio-diversity – The ASH community will embrace bio-diversity, be respectful of our natural environment and encourage regular interaction with nature. We will work to reduce the impact we have on our natural environment and stimulate a mindset that we are custodians of our planet.
School Grounds – The ASH school grounds are a part of us. Our campus reflects who we are and how we chose to interact with our environment.
To this end the ASH will incorporate these 8 Principles to help fulfill our Mission statement of creating life long learners as seen in our global perspective and Pupil Participation:
Global Perspective – International mindedness at American School of The Hague is defined through global awareness and open attitude of the school community. An essential element of international mindedness is accepting and appreciating different cultures, and one’s own. We believe individuals have the potential to make a positive impact on the world around them as exemplified by our core values and expressed through the following:
o Being open minded
o Developing linguistic skills
o Embracing diversity in ourselves and others
o Cultivating interconnectedness and interdependence
o Nourishing critical thinking regarding the world and its issues
Pupil Participation – ASH will actively support the student population in their facilitation of sustainability initiatives.