Lima climate summit result was disappointing, says Pope ahead of long-awaited encyclical on the environment 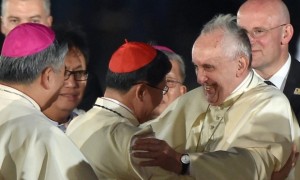 Pope Francis waded into the global debate about climate change on Thursday, saying that he believed that man was primarily responsible and that he hoped this year’s Paris conference would take a courageous stand to protect the environment.

The Pope said his long-awaited encyclical on the environment was almost finished and that he hoped it would be published in June, in time provide food for thought ahead of the UN climate meeting Paris in November.

Speaking to reporters on the plane taking him from Sri Lanka to Manila, he was asked specifically if man was mostly to blame for climate change.

“I don’t know if it is all (man’s fault) but the majority is, for the most part, it is man who continuously slaps down nature,” he said.

The words were his clearest to date on climate change, which has sparked worldwide debate and even divided conservative and liberal Catholics, particularly in the United States.

“We have, in a sense, lorded it over nature, over Sister Earth, over Mother Earth,” said Francis, who since his election in 2013 has made many appeals for the protection of the environment.

“I think man has gone too far,” he said. “Thank God that today there are voices that are speaking out about this.”

Last month, about 190 nations agreed the building blocks of a new-style global deal due in 2015 to combat climate change amid warnings that far tougher action will be needed to limit increases in global temperatures.

Under the deal reached in Lima, governments will submit national plans for reining in greenhouse gas emissions by an informal deadline of 31 March to form the basis of a global agreement due at a summit in Paris at the end of the year.

He faulted the Peru conference for not doing enough about climate change.

“The Peru meeting was nothing much, it disappointed me. I think there was a lack of courage. They stopped at a certain point. Let’s hope the delegates in Paris will be more courageous and move forward with this,” he said.