Davos 2015: climate change makes a comeback
Financial crisis pushed global warming down the agenda but Lord Stern’s respected climate economics are leading its way back up

The private jets lined up at Zurich airport and the helicopter rides into the high Alps tell their own story. Executives running the world’s biggest companies have always struggled to take the threat of climate disaster seriously. 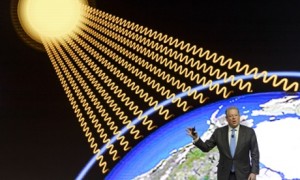 The financial crisis pushed climate down the Davos agenda. This year, there are clear signs that it has made a comeback. Al Gore gave the first big presentation in the main conference hall and, against a backdrop of pictures of flooding, death and destruction, warned that the world was in denial about the risks it was taking.

A bit later, Lord Stern said decisions taken at the intergovernmental conference in Paris in late 2015 will shape the next 20 years.

In some ways, Stern’s message to business was more important than Gore’s tub-thumping. For most of those in the audience listening to the former US vice-president it was probably a case of in one ear and out the other. It is unlikely that many of them will be that interested in the series of Live Aid-style concerts planned for June.

But Stern is important because as a respected economist he talks a language that business understands. The message he delivered is pretty simple: burning fossil fuels may seem like the cheapest-cost option, but it isn’t. For a start, the cost of renewable energy is coming down fast, by a factor of 10 since Stern produced his seminal report on climate change in 2006. That same period has seen oil prices yo-yo between almost $150 (£99) a barrel and below $40 a barrel. Renewable energy prices are heading in only one direction: downwards. Oil and gas prices are volatile, making it hard for businesses to plan.

Stern’s broader point is that tackling climate change will lead to better growth. Not necessarily higher growth (although it might) but better growth, with less stress from sitting in traffic jams and cleaner air means fewer deaths from respiratory diseases.

The commonly held belief is that this is a bad time to be making the case for a different sort of energy policy since falling oil prices make renewables relatively more expensive. Stern doesn’t agree. He says this is a good time to think about carbon taxes and removing energy subsidies, because the higher costs that will result for consumers and businesses will be offset by the falling price of crude.

Is business listening? Some certainly are, with the insurers standing to make huge losses from extreme weather the most attentive. Governments are also starting to pay attention, which is hardly surprising given that Stern says the estimated cost of pollution to China is 10-11% of GDP, higher than its annual growth rate