Following what he described as a “dark night of the soul”, Clarkson said he hoped to “regain the trust of the British public” by dedicating his time and financial resources to sustainable energy, road safety and forging mutual understanding and tolerance between people of different cultures and religions.

The 54-year-old said that the “fracas” last month, in which he punched a producer on the patio of a North Yorkshire hotel, had prompted him to “re-evaluate his priorities” and reflect deeply on his life, behaviour and carbon footprint.

The argument for divesting from fossil fuels is becoming overwhelming
Read more
The BBC opted not to renew Clarkson’s contract after the incident at the Simonstone Hall hotel, in the Yorkshire Dales, which left producer Oisin Tymon needing hospital treatment. More than 1.5 million Britons signed an online petition calling for Clarkson to be reinstated and for a relaxation of the laws against assault in cases that could be demonstrated to involve banter.

“Top Gear was a wild ride for an ordinary bloke like me,” said Clarkson, speaking to the Guardian at a pub near Chipping Norton, Oxfordshire. “But there comes a time when a man’s got to ask himself what he really stands for. And for me, that’s sustainable energy, traffic calming and an end to xenophobia and prejudice.” 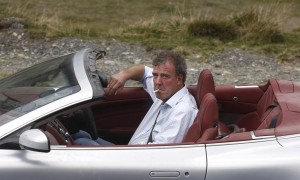 Clarkson said he had experienced a “wake-up call” after being sacked by the BBC, which he likened to “ramming on the brakes on the autobahn to Damascus”.

“It was like a pit stop,” he said. “One minute I was cruising along in a Porsche Cayman S to Dark Side of the Moon. The next I was in a bloody Prius humming along to Keane.

“If you’d told me a month ago that I would be joining the tree-huggers in their hand-knitted kerb-crawlers I’d probably have punched you.

“If you’d told me a month ago that I would be joining the tree-huggers in their hand-knitted kerb-crawlers I’d probably have punched you.

“But then I thought: ‘Where does physical aggro get you – apart from a few penalty points on your P45?’ I stopped off for a pint – and there was a bloody Guardian with all this stuff about climate change.”

Clarkson admitted that, in his previous life, he was more likely to read the Methodist Recorder than the Guardian. “No disrespect,” he said, “but I’ve always thought the Guardian made the Vauxhall Vectra look quite classy.”

Jeremy Clarkson dropped by BBC after damning report into attack on producer
Read more
“But, in the end, this is bigger than Planet Clarkson. This is Planet Everybloodybody, including members of the traveller communities and our Burmese and Argentinian friends,” he winked.

Clarkson decided to join the actor Tilda Swinton, chef Yotam Ottolenghi and campaigner Bianca Jagger in lending his name to the campaign to demand prominent foundations divest from fossil fuels. About 145,000 readers have already signed a petition asking the Bill and Melinda Gates Foundation and the Wellcome Trust for such a commitment.

“One hundred and forty-odd thousand is a start,” he said. “But we’ve got to put some oomph under the bonnet of this campaign. I’ve got the thick end of five mill following me on Twitter. Think of the g-force if they all switched to giving a toss about the human race.”

Clarkson, who has offered to become the new face of the Guardian campaign, said: “I was the poster boy for petrolheads. Now I want to become a – perhaps less gendered – poster person for the carbon-haters.”

“I’ve been talking to the Top Gear team about getting some great merch,” said Clarkson, drawing back his blue blazer to reveal a T-shirt he designed with the slogan: “No fracking way to carbon.”

“It’s not quite there yet. But me and [Richard] Hammond had a few jars last night and we’re working on a campaign that basically says you’ve got to shove gigatonnes of the black stuff back where the sun don’t shine.”

He plans to boost the campaign by founding a charity to garner support for a 20mph speed limit on most British roads, rising to 45mph on motorways and dual carriageways.

David Cameron expressed his backing for Clarkson’s change of direction on Tuesday, describing the presenter, who lives in his Witney constituency, as a “great mate”, who often dropped by to watch an episode of the US TV series 24 on DVD.

The prime minister called Clarkson’s speed limit plans a “brilliant idea, which we should definitely implement immediately”. Downing Street later issued a statement clarifying that he had meant to say it was an interesting proposal worthy of consideration.

BBC sources said the director general, Tony Hall – who has reportedly received death threats following the decision not to renew Clarkson’s contract – has convened a “war cabinet” to decide Top Gear’s future. He is understood to favour a complete reinvention of the programme, with leading contenders to present the overhauled version including Bill Oddie and the former archbishop of Canterbury, Rowan Williams.

Penguin Books, which has long published Clarkson’s bestselling series of opinionated works including The World According to Clarkson, For Crying Out Loud and Driven to Distraction, said next year it planned to publish a new instalment, provisionally entitled Here Are Some Thoughts That I Had, focusing primarily on Clarkson’s new-found sympathy for environmental issues, interfaith dialogue and intersectional feminism.