Damn the torpedoes (and Teslas)! Two of Japan’s biggest automakers are about to make sizable wagers on a different kind of clean fuel tech: hydrogen power. Toyota will launch the $57,500 Mirai fuel cell vehicle (FCV, above) next year, while hydrogen veteran Honda will out a model in 2016. But wait, aren’t EVs the last word in green cars? Fuel cell cars are EVs, in a way, but you can fill one up with hydrogen in five minutes rather than waiting hours for a charge. The only way to do that in an electric vehicle (EV) is by swapping the entire battery. So why is there exactly one production FCV available to buy today, but EVs everywhere? That’s a tale of efficiency, fuel, pollution and politics.

FCVs are electric cars in which the “battery” is a hydrogen/oxygen fuel cell. Unlike regular batteries with locked-in chemicals, fuel cells can be replenished — usually by hydrogen gas. Some cells also work with fuels like methane and gasoline, but they’re usually limited to industrial applications like power plants and forklifts.

Like a regular battery, fuel cells have an anode, cathode and electrolyte. Most FCVs, like the Mirai or Honda’s FCX Clarity, use a polymer exchange membrane fuel cell (PEMFC). In that system, hydrogen is forced through a platinum catalyst under pressure, which splits it into two ions and two electrons. The electrons power the vehicle’s electric motor, while the hydrogen combines with oxygen to form water — which exits as steam “exhaust.” Such cells are arranged in stacks to produce enough voltage to power a car. 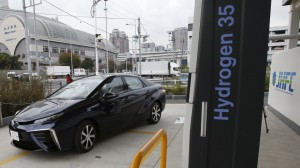 WHERE DOES THE HYDROGEN COME FROM?

If you want a 100 percent green FCV, you need to make your hydrogen in a non-polluting way. That’s no easy task, but the best way right now is using hydrogen electrolysis, in which hydrogen and oxygen gases are produced by passing a current through water. The best systems can only produce hydrogen with about 80 percent of the energy of the electricity used to create it, however — not exactly an efficient solution.

Natural gas reforming (above) is a more cost-effective way to make hydrogen, but it is polluting. Steam is heated to 700-1,000 degrees Celsius (about 1,800 degrees Fahrenheit) and combined with methane to produce hydrogen and carbon monoxide, along with a small amount of CO2. In all, 95 percent of US hydrogen is produced that way thanks to large natural gas reserves from hydraulic fracturing (“fracking”).

EVs have an established recharging infrastructure along routes (and in your home), but hydrogen-distribution stations are few and far between. That’s partly due to lack of demand, but also because building them is expensive. Regular EV-charging stations cost tens of thousands of dollars to build and Tesla’s Supercharger stations run up to about $300,000. But setting up a single hydrogen fueling station costs $1 to 2 million because of the challenges in handling liquid hydrogen. As a result, there are currently only 50 or so of them in the US, and 22 of those are in California.

Why so expensive? As detailed by Autoblog Green, the main tank at a hydrogen fueling station holds nearly 10,000 gallons of liquid hydrogen stored at around minus 250 degrees Celsius (minus 418 F). Unlike gas or diesel, it’s kept above ground in a special area away from the pumps. It’s then converted to gas in vaporizer towers, pressurized and transferred to smaller storage tanks for distribution.

Car and Driver describes how to fuel up: First you connect a multi-pronged communication plug to your vehicle to relay its fuel needs. Then you connect the hydrogen nozzle, seal it via a twist-lock and pump, baby, pump. Some FCVs accept gas at both 350 bar and 700 bar of pressure, with the latter giving greater range. It takes about three to five minutes to fill up with 700 bar hydrogen fuel, which runs about $3.00-$3.50 per GGE (gasoline gallon equivalent).

Toyota and Hyundai will give buyers free hydrogen for three years. Toyota has a grand scheme to increase the number of such stations in the US by building 19 more in California and another 12 in a corridor between New York and Rhode Island. California has earmarked $200 million for hydrogen stations and wants up to 40 more by 2016. Few other states have announced such plans, however, meaning it’ll be a challenge for early FCV adopters to tour around the US, à la Tesla Motors.

WHY SHOULD I CARE?

If you’re reading this, we assume you don’t want to leave a smoking husk of a planet to future generations — and we’ve already detailed how EVs help reduce greenhouse gases. But there are more selfish reasons to want green vehicles, too. Some, like Nissan’s Leaf or Toyota’s Prius actually strain your wallet less than a regular car over time if you count rebates. So how do FCVs fare as practical, green vehicles?