Strizki, a Thomas Edison of clean renewable energy who once worked for the state Department of Transportation, announced he’ll be opening a second hydrogen home, also in Hopewell, in a couple of weeks.

“It’ll be the second one in the Western hemisphere,” said Strizki, owner of Renewable Energy International.

Some of those assembled said they are interested in whatever efficiencies they can bring to their current home or what they can look for in retirement homes.

Surrounded by three-pound, bulletproof solar panels, fuel cells, an electrolyzer and other technologies, Strizki explained his own compact, off-the-grid power plant. In summer months, solar power provides more than enough juice to run his home, so he stores the extra.

His system uses solar power to run an electrolyzer that splits tap water into hydrogen and oxygen, he said. The hydrogen, stored in tanks on his premises, is later converted into electricity using fuel cells. That’s what sees him through the winter months.

Strizki’s talk — and the alliance of his nonprofit Hydrogen House Project with New Jersey Audubon — is an effort to inform the public about the effectiveness, safety, and urgency of adopting such technology. 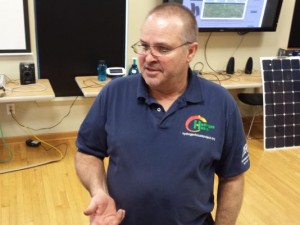 “We have to educate people that hydrogen is safe,” Strizki said. “They have to know that the big nuclear ball in the sky will provide us with all the energy we could possibly ever want and then some, and that we don’t have to destroy all our groundwater doing fracking.”

Strizki, whose work is in demand internationally, warns that the Earth is at a turning point and that, when it comes to climate change and the environment, it just won’t do for the U.S. to wait and work in crisis mode. If the next generations are left an environmental mess, he said, they ought to also be left some tools to fix it, namely, energy technologies that don’t produce any toxic end products.

“The world is becoming a very small place,” he explained. “It takes seven days for the air in China to get here.”

The audience also was introduced to the inventor’s Joule Box, a portable power unit whose pieces are all modular and commercially available. Its $65,000 price tag can be mitigated to $40,000, he said, using the federal investment tax credit available through 2016 under the Energy Improvement and Extension Act of 2008.

Strizki opens his own 3,500-square-foot solar hydrogen house, which features all the modern amenities, for tours twice a month.