Honda, Hyundai, and Toyota have made most of the headlines in hydrogen fuel-cell development lately, but the Volkswagen Group may soon increase its presence.

Audi announced today that it will acquire a package of patents from fuel-cell company Ballard Power Systems, which it says will be applied across all VW Group brands.

The luxury brand is acquiring those patents “for the entire group,” and will make them accessible to all VW Group brands, Audi technical chief Dr. Ulrich Hackenberg said in a statement.

Based in Burnaby, British Columbia, Canada, Ballard claims to have shipped over 215 megawatts of fuel cells to date.

The company markets cells for stationary use in distributed power generation, as well as for use in forklifts and buses.

The sale of the patents also includes an agreement to extend technical collaboration between Audi and Ballard until 2019.

Audi and Volkswagen have shown off a handful of fuel-cell prototypes lately, so perhaps the newly-acquired patents will allow some of those vehicles’ technology to see production. 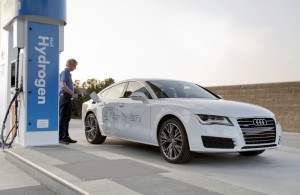 At last fall’s Los Angeles Auto Show, Audi unveiled the A7 h-tron quattro, a “performance” fuel-cell car based on the A7 luxury hatchback.

The car featured a combination of fuel cell and battery power–making it a hybrid, of sorts–and an electric all-wheel drive system with no mechanical connection between the front and rear axles.

It also showed the Golf SportWagen HyMotion concept, based on the production SportWagen that will land in the U.S. soon with gasoline and diesel engine options.

Despite all of the apparent interest, it’s still unclear whether Audi and Volkswagen will launch a hydrogen car without adequate fueling infrastructure in place.

The limited number of stations–mostly clustered in California for now–is likely to cap fuel-cell adoption at 50,000 vehicles or less in North America by 2020.